One of the objectives of the project is to get the radio to suit look similar to the Tivoli radio I currently have.  At first I tried phoning around repair companies to see if there as an old one going spare.  However there was not.

I realised I would have to end up making one myself.  However I did'nt really want to source some cherry wood and use that for two very good reasons.

So a quick trip later and some online googling I bought some MDF and a few sheets of MDF veneer.  The veneer cost me about £20, and the wood was about a £10, but I had lots left over.

With a bit of careful cutting, I got a carcass for the box all gluded up. Although it was not quite square, so I scrapped the first box and started again. 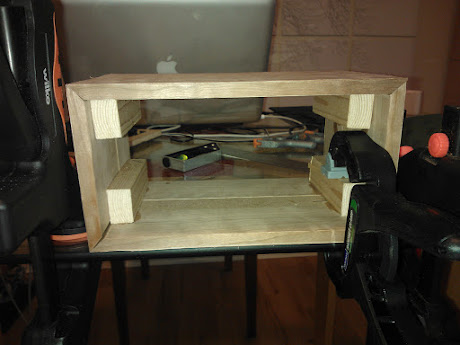 For the front and the back plates I just cut out two pieces of MDF to fit the box.  Since I planned on using a mobile phone / tablet to control the radio, I had no need for fancy control panels.  I did cut out To make life easy I just bought a roll of speaker cloth.

Some staining and polish, and the final box was complete. 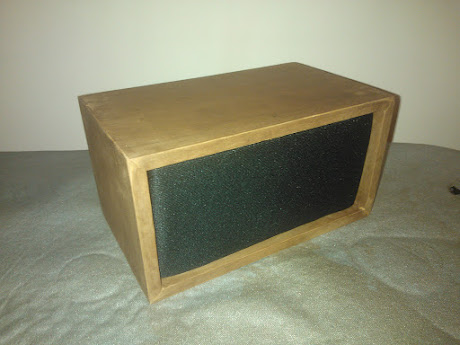 For the amplifier - since on its own the Pi can't power the speakers, I looked around for a small 5v amplifier.  On ebay I found the following  Mini Digital 3W+3W Amplifier Board, which although is tiny, it seems to put out a decent amount of sound for what I'm looking for.