Dice boot is complete but no way finished

This morning I printed the last few pieces to test the dice boot over a number of cycles. 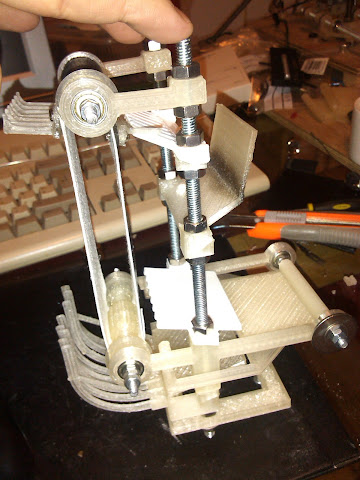 Originally I was to have wire to allow the dice to be kept on the rake.  However this was really un-reliable.  Just due to the fact that trying to get consistent bends proved too hard.  So I just went with really thin printed version.  The lesson I learnt with the con-rods is started to pay dividends.

I have had it roll a die when powered with a screwdriver.  However its not good enough for the robot.  About one time in 8, I lose the die.  If I add two dice to the mix, I lose one about every three roles.

I have learnt a lot of lessons with this.  However I now think its best just to start again and build a new model and design.  The problems I need to resolve are as follows

There is not enough room for two dice to sit on the rack.  The screws that attach it to the belt, can spill the die off the boot.  I need to remember that the effective width of the unit is that between the two screws attaching the rack.

The base is far too fussy, and there is not a clear way to mount it to something.  Need to combine a few parts and provide an easy way to fix it to a base.

The ramp does not drop down far enough.  The dice sometimes won't move.  Allow the ramp to drop further down then needed.  Also ensure that there is a drop between the tray and the bottom most ramp.  Sometimes dice get trapped by the lip created between these.  Allow the tray to rotate an extra 10 degrees.

Make a better path between the ribs and the rack.  A couple of times the dice just get stuck here.  Also raise the height of the ribs a bit more.  The shape is sound, but the dice just needs a little extra.

The angle of each ramp can be tweaked a little.  Often the dice just bounce off the ramp and belt.  This causes a die to just fly out of the boot.

The tolerances between parts are too tight.  I had to file too many bits to get things to work.  Allow at least 2mm between moving parts.  For example, why did I make the bits on the ramps so wide and force a really difficult print for the rake itself.  Split the difference between the two. 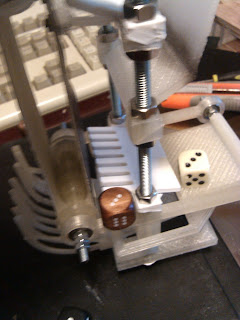 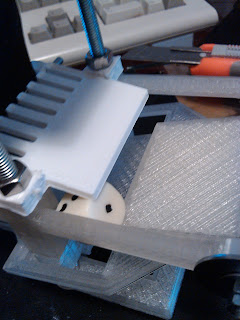 With the trigger arm that lowers the dice tray.  This is far too fiddly and un-reliable, somehow I have to make is drop the dice much easier.

There is no thought as to the motor to drive the system.  I've found one know.  This needs to be accomodated from the start.

I cut the belt too long, which added problems.  The mouting of the trigger and rake was also a bit off.  Need to print a template to make that easier.

Need to increase the width of everything, to accomodate two dice between the bolt holding bits to the belt.  Its far two narrow now to have two dice on the unit.

Need sides on each stage.  The dice more than often just bounce out and fly everywhere.

I'm still impressed with what I've acheived for a first stab.  Just need to iterate and go on for version II